Campaign launched to protect 80% of Amazon at key environment summit 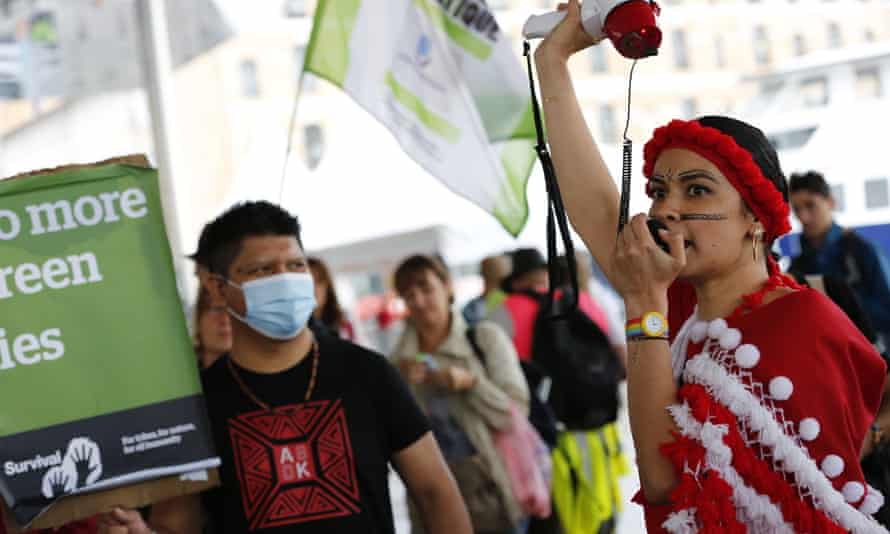 Taneyulime Pilisi, a Kalin’a woman from French Guiana, speaks at an Our Land Our Nature counter-summit march in Marseille. Photograph: Noé Gabriel

Indigenous voices on the environment are finally being heard as Marseille hosts a global biodiversity summit, with a call to protect 80% of the Amazon, as well as a “counter conference” highlighting the conservation movement’s historic violation of people’s rights.

For the first time in its seven-decade history, the International Union for Conservation of Nature (IUCN) is including indigenous peoples as full voting members in their own right, rather than under the NGO category. Dozens of indigenous meetings are happening at the summit – which occurs every four years – with representatives from 23 organisations.

Greater inclusion of indigenous representatives comes as the European “fortress conservation” model, which resulted in vast human rights abuses and an estimated 20 million people displaced from their homelands worldwide since the 19th century, is increasingly being challenged.

Historically, the global conservation movement was based on the idea that protected areas flourish free from human disturbance, but a growing body of evidence shows that indigenous communities are the best at looking after wildlife, and that as much as 80% of the world’s remaining forest biodiversity lies within indigenous peoples’ territories.

José Gregorio Díaz Mirabal, a member of Venezuela’s Wakuenai Kurripaco people and coordinator of the Congress of Indigenous Organisations of the Amazon River Basin (Coica), which represents more than 2 million indigenous people, said they had been fighting for decades to be heard.

“We come to the IUCN with our voice and voting rights. We seek to build a new alliance with equal rights on equal terms, but we see that there is still much to do, so much to recognise,” he said.

“Less than 1% of all the funding that is invested in protecting intact biodiversity and mitigating climate change in our territories reaches our communities, and that has to change. It’s absurd that so much of the funding goes to consultants who are sent to tell us what we already know about how to conserve what we are already conserving.”

Representatives from countries across the world will vote on motions this week that will shape future global conservation policy and the allocation of finance. Coica’s Amazonia por la vida (Amazonia for Life) campaign motion is demanding protection of 80% of the Amazon basin by 2025 (protected areas and indigenous territories make up about 45% currently) with the emphasis on indigenous peoples managing those protected areas. They are asking governments to recognise 100% of indigenous land in the Amazon and ban all forms of extractive industries in those areas.

A record number of environmental defenders were killed in 2019 for protecting their land, 40% of whom were from indigenous communities. “Science is saying the best-conserved areas are indigenous territories … yet we have the highest level of murder,” Díaz Mirabal said.

As well as showcasing a range of ideas from campaigners, scientists and conservationists, the summit provides policymakers with a chance to discuss issues in the run-up to the Cop15 “Paris agreement for nature”, due to be negotiated in Kunming next year. The headline target is likely to be protecting 30% of the planet for nature by the end of the decade (the “30×30” target).

The draft Cop15 agreement includes a clause that traditional knowledge of indigenous peoples and local communities should guide decision-making “with their free, prior, and informed consent”. But indigenous groups, academics and campaigners from 18 countries gathered in Marseille at the “Our Land, Our Nature” congress, a “counter-summit” on the eve of the IUCN meeting, called for land rights to be at the heart of conservation, not protected areas. More than 3,000 people attended the event, either in person or online, which included a protest march through the French city.

“The 30×30 target is a structural problem,” said Mordecai Ogada, director of Conservation Solutions Afrika. “We need to rethink the definition of protected areas, those that exist, and we need to look for a more sophisticated model of biodiversity and conservation. That’s where the big organisations have such a challenge, because they find it very difficult to change their own structures.”

The alternative summit included representatives from Survival International, Rainforest Foundation UK and the Minority Rights Group, as well as a number of indigenous people with different perspectives on the usefulness of protected areas.

Juan Pablo Gutiérrez, a representative of the Yukpa people in Colombia but living in exile in France, said areas that governments were designating as “protected” had been safeguarded for years by indigenous people.

“What’s happening with 30×30 is that governments want to distract global opinion by proposing solutions that don’t relate to the real problem at all. If you want to attack climate change, you need to attack the causes that are leading to it,” he said, citing western consumption and overexploitation of resources as the key drivers of ecological destruction.

A UN report published earlier this year found indigenous people in South America were the best at looking after forests, with deforestation 50% lower than elsewhere, according to a review of more than 300 studies. Representatives at the Our Land, Our Nature gathering argued that there was little scientific evidence that protecting 30% of the planet would stem biodiversity loss. The previous 10-year UN target agreed in 2010 in Aichi, Japan, set goals that by 2020, 17% of terrestrial areas and 10% of coastal and marine areas would be conserved.

Lara Dominguez, a lawyer with the Minority Rights Group, said: “Despite being very close to achieving the 17% target in many states, biodiversity loss has reached unprecedented levels. Even though we have more protected areas, it hasn’t actually impacted biodiversity in a positive way.”

Dominguez believes these policies are driven more by politics than science and argues that a rights-based approach to conservation would be far more effective.

Francisco Ramiro Batzín Chojoj, legal representative of the Guatemala-based indigenous organisation Sotz’il, said it was important that indigenous people had a seat at the table and that working towards the 30×30 target was “fundamental”.

“We are calling for indigenous people to be respected in all these initiatives because it’s essential they are involved.”

Stewart Maginnis, global director of the IUCN’s nature-based solutions group, said: “The 30×30 can and must work to support indigenous peoples by strengthening their custodianship, voice and rights.

“Protection for nature conservation need not and should not exclude people,” he said. “Many of the world’s protected and conserved areas are managed in a way where people and communities live and work within their boundaries.”

A UN policy brief on human rights and the environment, released last month, emphasised the need for a dramatic departure from “conservation as usual”. Neville Ash, director of the UN Environment Programme conservation monitoring centre, said indigenous people and communities who governed large areas of land were often not recognised for their extensive contributions to nature conservation. “This needs to change,” he said.

“The draft framework is explicit on the importance of employing rights-based approaches for its implementation, and governments and other actors will need to learn from mistakes of the past and be held accountable for delivering on these future commitments in line with human rights obligations.”