‘Project of death’: alarm at Bolsonaro’s plan for Amazon-spanning bridge

From the veranda of her wooden home, Joaci da Silva looked out across her garden towards the waters of the River Amazon, and shuddered as she considered the future.

“Today we live in a paradise,” she said.

But the future of that paradise is in doubt after Brazil’s far-right president Jair Bolsonaro backed plans to build a bridge across the river, and extend a busy highway hundreds of miles through protected forests.

“We know there will be a big impact,” said Da Silva, 51, who – like many people in the tiny riverside community of Santíssima Trindade – fears the project will bring crime, noise and pollution. “It will bring some benefits and jobs, but there will be devastation.”

A short boat ride away from her home is the quaint colonial backwater of Óbidos; beyond that is 500km of rainforest stretching to Suriname – the “Calha Norte”, or “North Zone” of Pará state.

Military officers in the government say the region should be settled and developed, as happened in other parts of the Amazon during Brazil’s military dictatorship (1964-1985), a period revered by Bolsonaro.

Along with economic benefits, they argue that populating the Calha Norte could also help defend Brazilian territory – even raising the spectre of a supposed threat posed by Chinese migrants in Suriname.

The plan – known as the Baron Rio Branco programme – revises an elaborate infrastructure scheme first proposed in 1953 which includes constructing a major hydroelectric plant, building a bridge across this narrow stretch of the Amazon and extending a major highway all the way to the Suriname border.

The US government briefly offered support to the some of the plans through an Amazon “megaprojects” scheme run by a private contractor for its development agency, USAid, but that programme was shut down in December under pressure from indigenous organisations and environmental groups.

Bolsonaro and his ministers say that the Amazon’s 23 million people want development and argue that reducing poverty will combat rising deforestation. But environmentalists, indigenous leaders and riverside dwellers like Joaci da Silva are deeply dismayed by the project. 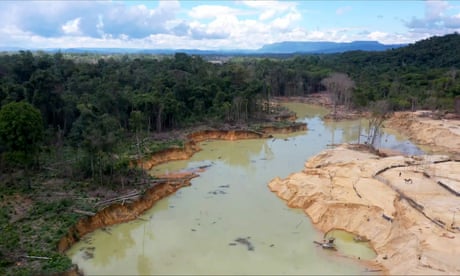 Three-quarters of Pará’s North Zone consists of protected areas and indigenous reserves. Environmentalists say building a highway will open the region up to loggers, wildcat miners and land-grabbers, as happened further south in the Amazon where the same highway – the BR-163 – borders one of the most devastated conservation areas in Brazil, the Jamanxim forest.

The BR-163 connects the agricultural powerhouse state of Mato Grosso to the Amazon ports Miritituba and Santarém, and in November the army finished asphalting its last unpaved section. The plan includes two alternative routes to link the road to the proposed bridge at Óbidos and points north.

Forest peoples see the highway as a threat. “It will bring land invasions and looting of minerals and wood,” said Juventino Kaxuyana, a leader from the remote Kaxuyana-Tunayana indigenous reserve – home to voluntarily isolated indigenous groups – which the highway will cross.

“The Amazon is asking for help,” said Ivanildo de Souza, president of Cachoeira Porteira, a settlement founded by descendants of enslaved people which is threatened by a hydroelectric plant included in the plan.

Bolsonaro’s government started working on the Baron Rio Branco programme after he took office in January 2019. Maynard Santa Rosa, an army general put in charge of the scheme, said that the government was working to integrate the North Zone – adding that the area was “still a desert”.

Santa Rosa has since resigned – but not before arguing at a meeting in the state capital, Belém, last April that the programme would protect the country from a putative invasion of Chinese migrants in Suriname. There are currently 14,000 Chinese in Suriname, 2% of its population of 583,000. Brazil’s population is around 210 million. Details of the meeting were first published by The Intercept and Open Democracy.

On a recent morning, some in Óbidos were enthusiastic about the plans. Most local people live from fishing, work for city hall or in two Brazil nut processing plants.

“It would improve things for the town,” said Jean Reis, 45, slicing jagged rows of fins off the black cujuba fish he was selling on the waterfront. At the dusty town museum, Regina Figueira, 56, said she hoped the bridge might revive prosperous times, when the town was an important port. “People had more purchasing power,” she said.

In August a group of military officers came to Óbidos to promote the scheme. They told the mayor, Francisco Alfaia, that populating areas around the highway would protect the North Zone from being “colonised” by foreign NGOs.

The argument failed to convince him. “They haven’t explained it very well,” Alfaia said. “I don’t see what benefits it would bring us.”

Alfaia’s doubts were fed by his own experience in another Amazon region battered by an ambitious development project.

He previously worked as a bank manager in Altamira, the Pará town whose population almost doubled after the mammoth Belo Monte hydroelectric plant was built nearby. Riverside communities were flooded and residents now live in crime-ridden, urban slums. The murder rate soared by over 1,000%.

“We’re going to turn our town into a bunch of favelas while prostitution and robberies grow,” Alfaia said.

The officers also visited Nélio Aguiar, mayor of the nearby port of Santarém, who was similarly skeptical of the plan which includes the construction of several hydroelectric plants.

When approached for comment, the Brazilian government’s strategic affairs department pointed to a statement on its website. 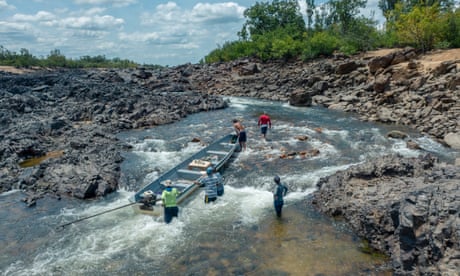 “The Baron Rio Branco programme is still under discussion,” it said. “The expectation is that a development cluster would be made possible, by increasing the presence of state institutions in the region.”

Environmentalist groups and indigenous leaders have repeatedly raised the alarm over the programme. The Brazilian Indigenous People’s Articulation called it an “atrocity” that contravened indigenous rights enshrined in Brazil’s 1988 constitution.

Auricélia Arapiun, 32, a law student and indigenous leader in Santarém, said that rather than developing the region, the government’s plans would “make the Amazon a desert”.

“This is a project of death,” she said.